BEIJING, April 8, 2020 /PRNewswire/ — Using everyday ingredients and necessities, Li Xiaodong, 39, also known as @xuanbaobaba on Kuaishou, attracted more than 220,000 followers as he recreates cutscenes and characters from popular movies and stories. Li claimed this idea came to him, while he was on lockdown at home due to the COVID-19 pandemic. Li, a feature film postproduction professor by training, found himself bored and looking for an outlet to express his creativity. Other than cooking, Li spent time watching reruns of his favorite movies, such as Crouching Tiger, Hidden Dragon (2000). Frustrated, he pieced his love for cooking and movies together and thus inspired his unique artform.

Li credited his viral videos to the ubiquity of the well-known, and well-loved, films. "Many creative internet celebrities film things that are trendy, but I prefer old school stuff, I watch martial arts movies and read classic Chinese novels when I was young, so I like to make something like that", said Li.

For Li, the work is all about being authentic in an age of social media and putting his energy in things he likes with his loved ones. Li now has more than 220,000 followers on Kuaishou since he posted his first home-made blockbuster on the 16th February. These short videos staring various household food and objects have proven a hit with fans, with many following him on Kuaishou across national and language boundaries. ‘Will Smith even once liked and shared my videos!’ Li exclaims.

As he prepares to share behind-the-scene tutorials of his viral videos, he hopes to be a pioneer in this field and encourage more people to look for beauty in their everyday environments. The pandemic might have put many things on a halt, but it has also allowed people to channel their unstoppable creativity and heartfelt emotions, which turn kitchens into movie studios, and encourages people to see the beauty of a different medium of expression. 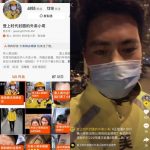