Manila, Philippines — The highly-anticipated UAAP Cheerdance Competition, which happens annually, has already a winner for this year. It’s none other than the National University Pep Squad – yes, the defending champion.

The contest was held at the Mall of Asia Arena in Pasay City last Sunday.

Out of 800 points, the team has notched 722 points in their routine, which paid tribute to the Philippines.

In the meantime, what came next was the FEU Cheering Squad which recorded a total score of 706. In their routine, they paid tribute to Michael Jackson – the so-called King of Pop.

The Adamson Pep Squad – which showed a Caribbean-style routine – was declared second runner-up. They got a total of 658.5 points in their performance. They were a few points ahead of the UST Salinggawi Dance Troupe, which placed third runner-up with their 650 points.

Garnering scores of 645 and 622.5 points respectively, the UE Pep Squad and the UP Pep Squad came in next on the ranking list.

With 593 points, in the meantime, the Ateneo Blue Babble Battalion placed seventh – a step higher than their rank last year.

The De La Salle Animo Squad was the eighth place after notching 577.5 points.

Now, in terms of the group stunts competition, still, the NU’s bet stayed first on the list, with 237 points in the said category. Of course, the FEU Cheering Squad came in next, garnering a score of 223 points.

With 206 points, the Adamson Pep came in next.

The MOA Arena was filled with quite a few fans of the different competing schools in the said competition. Every year, this contest is among the most well-liked and anticipated competitions that make students and alumni of these schools agog annually.

So, were you part of this yet another memorable event in the history of UAAP?

Also read: #WalangPasok: Classes Will Be Suspended for La Salle and Benilde Because of SEA Games 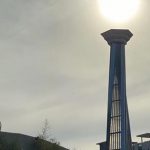