South Korean idol Sandara Park, dubbed the “Pambansang Krung Krung ng Pilipinas,” has been credited several times as the pioneer of the “Korean Wave” in the Philippines. Born in Busan, South Korea, the 38-year-old singer, actress, and TV host earned the title given by fans because of her bubbly, unique, and naturally funny personality.

How did Sandara Park End Up Living in the Philippines?

Sandara Park was born to well-off parents until her father’s business failed after a crippling bankruptcy and put their family in a tight financial spot. Her father then tried his chances in the Philippines, where he lived in Pasay City, before relocating the entire family when he had enough money. When Sandara was studying in the Philippines, she learned how to speak Chinese, English, and eventually Tagalog. Her past and current interviews show her outstanding development in both languages.

Sandara Park, also known as Dara, rose to fame in the Philippines when she won in the first batch of “Star Circle Quest” back in 2004. She was engaged with several brand endorsements, TV appearances, and films, like “Bcuz of U” (2004) and “Can This Be Love” (2005), before she left the country in 2007 to return to South Korea.

A few years later, she joined YG Entertainment and debuted in 2009 in a K-pop girl group called 2NE1 as Dara, together with CL, Bom, and Minzy. Since then, 2NE1 has become one of the best-selling and most iconic K-pop girl groups of all time, winning several awards and releasing albums in both Korean and Japanese.

After 2NE1’s disbandment in 2016 as an official girl group for seven years, Sandara remained as a solo artist with YG Entertainment, starred in several shows, and hosted various TV shows in South Korea before leaving her agency of 17 years in May 2021. The former 2NE1 member officially signed with ABYSS company back in September 2021.

She has a YouTube channel today with 1.35 million subscribers.

Despite her success with 2NE1 and as a solo artist, Sandara Park never forgot to show her love for the Philippines and occasionally visits the country from time to time. 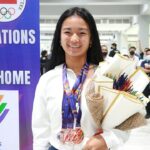