22-year-old Blind Man brought the America’s Got Talent judges to tears with his incredible talent. Kodi Lee is blind with Autism.

Singing involves emotions and in many music shows, it is common to see judges and audience brought to tears by a contestant. That is exactly what happened at the famous American Got Talent TV Show. Even the infamously harsh judge Simon Cowell acknowledged the talent of the 22-year old singer and pianist Kodi Lee.

The clip of the performance is currently trending on YouTube. Kodi Lee’s emotional piece of performance got the internet on a frenzy, especially because he was the first contestant of the show this season to receive the golden buzzer for his audition. As the show begins its season 14, Kodi Lee has laid down the early markers as one of the favorites to win the grand prize.

Kodi Lee’s entrance did little to reflect the immense talents in him as he was accompanied by his mother, Tina. As everyone was confused by his movements, his mother explained soon that Kodi is actually blind and autistic.

Taking the judges, his mother said:

“We found out that he loved music really early on. He listened and his eyes just went huge, and he started singing, that’s when I was in tears.”

“It actually has saved his life, playing music.”

Kodi, who is Korean-American, afterward took to the piano and started singing “A Song for You” by Donny Hathaway. This performance earned him a standing ovation from the show judges Simon Cowell, Gabrielle Union, Julianne Hough, and Howie Mendel as well as the audience and the show host Terry Crews.

According to his website, the blind autistic singer was born with a medical condition known as the optic nerve hypoplasia (ONH) and at the age of 5, underwent a life-threatening surgery. He was also diagnosed with autism spectrum disorder (ASD) at a very early age.

“Your voice is absolutely fantastic, you have a really beautiful tone. Thank you so much for trusting us on this show.” 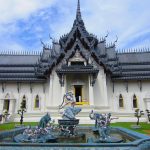