Lincroft, New Jersey – Jane Scimeca, professor of History at Brookdale Community College, is writing a biography about Geraldine Livingston Morgan Thompson. She will tell the fascinating story about Mrs. Thompson’s life, including the county and state’s history as the backdrop of all her accomplishments. You will sense her great patriotism, dedication to helping people, and the broad scope of her expertise. Thompson has been affectionately called the First Lady of New Jersey, and her achievements could put her among the great pantheon of American Reformers.

“It is very rare to find something in history that no one has written about,” said Scimeca. “I love her story. I find her an extremely compelling and inspiring individual.”

Authoring the book occurred to Scimeca while working with her class on a lecture about women’s history and Eleanor Roosevelt. Assistant Professor of the Bankier Library Judith Ungar gave Scimeca a daily column that Roosevelt wrote called “My Day” that was syndicated around the country. Several of her columns regularly included Mrs. Thompson and often mentioned visiting her good friend in Red Bank, NJ, and all the important things she was doing with Visiting Nurses and Monmouth County Social Services.

“When I was talking to my class about Eleanor Roosevelt, I said she was right here, she came to visit Mrs. Thompson on this land where we are having class today,” Scimeca said.

Mrs. Thompson grew up in a prominent New York City family in the Gilded Age. Her mother was a Livingston, and her father was a Morgan. She was tutored at home, typical for her social class, and spent two years in France at the Society of Sacred Heart, a French convent school to spread her intellectual and spiritual wings. She married Lewis Steenrod Thompson, heir to a fortune amassed by his father, William Payne Thompson, a founder of the National Lead Company and secretary of Standard Oil Company where he worked closely with John D. Rockefeller Sr.

Lewis and Geraldine both had tuberculosis at an early age. The cure for tuberculosis at that time was rest, spending time outside in the cold air, and a high-calorie diet to prevent wasting away. Their connection came while recovering during a “health travel.” As a result of tuberculosis, Lewis could not pursue a career in civil engineering and instead became quite the marksman with a life devoted to hunting, fishing, and horse racing. He spent much of his time at Sunny Hill, a plantation he owned in southern Georgia, and Mrs. Thompson spent most of her time at the Brookdale Farm with their four children and five children from Lewis’ family. She had a large staff of nurses, cooks, domestic servants, and governesses, and the nine children all attended boarding school during the school year.

Mrs. Thompson’s life was influenced by tuberculosis, a driving force that shaped her life, marriage, work, and career as a public health advocate.

“Tuberculosis is a character in my book,” Scimeca said.

Mentored by her mother and grandmother before her, Mrs. Thompson was a valiant 19th-century woman committed to Christian leadership and training. She was involved with many women’s clubs and organizations that promoted voluntarism and developed the potential of women through education and training to improve communities.

“How seldom are valiant women to be found,” exclaims Madeleine Sophia Barat, the foundress of the Society of Sacred Heart in France where Thompson was schooled. “The Bible says they are more precious than pearls and diamonds. Let us, then, labor with all our might to train such women, at whatever cost to ourselves.”

Mrs. Thompson could run organizations, was an expert fundraiser, and was dedicated to service. In addition, she was committed to democracy.

“She knew how to do all these vastly different things. So, I have enormous respect for that,” Scimeca said.

Concerned about public charity and social reform, Mrs. Thompson created and opened the Monmouth County State Charity Aid Society. Her initiatives continue, including establishing the Visiting Nurse Association (VNA) 110 years ago and being their first President. Her story will provide evidence that she was instrumental in starting the public health movement in Monmouth County that is still going strong, helping over 60,000 Monmouth County families each year.

Mrs. Thompson was the President of the New Jersey Republican Committee. She was a political appointee and was reappointed to the Board of Institutions and Agencies eight times by both parties. The Department of Institutions and Agencies was created to reform and monitor the state’s various psychiatric and medical care programs, correctional institutions, and guardianship of children. She was the first woman appointed, served for over 40 years, and never missed a meeting.

“She knew how to use politics to achieve social welfare goals,” said Scimeca. “If she were a man, she would have been a United States Senator. By the 50’s she had been a guest at several White Houses, under a variety of administrations.”

A part of the book will be dedicated to the common historical theme that the success of the public person conflicts with the turmoil in private life. Mrs. Thompson was very guarded; her personal life was kept confidential. This intrigues Scimeca and will provide for an enthralling read.

“Her romantic and professional relationship with Miriam Van Waters seemed to be buried by her family and probably never would have been unearthed if it had not been for historians’ findings in Van Water’s attic,” said Scimeca.

Near the end of Mrs. Thompson’s life is the heartbreaking struggle of what would happen to the farm she lived on and owned for over 70 years. None of her family wanted it, and the County, Rutgers, and the Quaker Church were among the many groups pressuring her to give them her land. “This is very poignant because the people of New Jersey were also her children, and they are the ones who got it,” said Scimeca. Her land is now home to Brookdale Community College, Monmouth Museum, and Thompson Park.

Mrs. Thompson’s census always listed her occupation as none. Nevertheless, there are lists of many committees and organizations throughout New Jersey that she founded, headed, and funded. She was never interested in her power but in empowering others. Her drive was to make her community a better place and, by doing so, would make democracy stronger. Her patriotism was steadfast. Scimeca’s book, written with gratitude for all Thompson did for our community, will be out next year.

The Monmouth County VNA Health Group is supporting the writing of the book. They are committed to honoring their founder by helping Scimeca research and write this biography. They plan to use the book as a history of their organization and to connect their modern organization to their founder.

Read: Poor Farmer who Sold Everything to Pay His Son’s Education Finally Sees Him Graduate from University 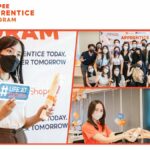 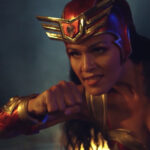