Star Wars fans are counting down to the day the grand opening of the biggest Disney theme park upgrade in years – Star Wars: Galaxy’s Edge. For many years the fans of this cinematic franchise have been complaining about being underrepresented in the theme park area, now they will have something to smile big about.

Star Wars: Galaxy Edge has been under construction for some time, and the fans can’t wait for the immersive experience.

Now, several aerial photos have been released of the nearly-completed project, and the fans could not keep calm.

The land will comprise famous restaurant brands including Oga’s Cantina and Ronto Roaster, the former being the first ever Disney venue to sell alcoholic drinks.

The first identical Stars Wars land will be opened at Disneyland Park in Anaheim, California on 31 May. As much as Star Wars fans are happy about it, it will not be cheap to visit the land, with Disney increasing their admission fees back in January. A one-day, one-park ticket goes for $104 during the off-peak.

If you want a ticket for prime-time visits like weekends and holidays, you will have to cough $149.

The released photos show a sprawling area filled with various under construction creations including the famous Millennium Falcon.

The second Star Wars land will be opened on August 29 at the Walt Disney World Resort in Orlando, Florida. The land in Orlando will make history as the largest single-themed land expansion ever made at Disney Park sitting on 14 acres of land.

However, the aerial photos give us a hint of how massive this operation is. Developers say that the theme park’s architecture draws inspiration from Middle Eastern cities including Istanbul and Jerusalem.

Some of the photos focus on the new rides and numerous attractions while others emphasize on specific areas such as the Black Spire Outpost, the Rise of the Resistance area, and saving the best for last, the Millennium Falcon.

Rumor has it that the Black Spire Outpost is a new village in the Star Wars World, which is an extension of the locations the film fan have known to have a great affection of. The Millennium Falcon is believed to the up to-scale of the original craft from the real Star Wars film.

This billion dollar park will be based mostly on the planet Batuu, with the staff acting as the planet residents dressed bounty hunters, adventurers, and smugglers.

“On the edge of the galaxy, between the Unknown Regions and Wild Space, there is a long-forgotten planet named Batuu. Now you are invited to visit this beautiful and treacherous village of secrets, built upon secrets.”

It is no telling that Star Wars has played a major role in most of our childhood as well as adult years. The film is one of the most influential movies in the history of contemporary cinema and has managed to not only unite but inspire millions of fans around the world. 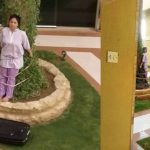