Manila, Philippines — The question and answer portion of any beauty pageant is the most important part of the candidate’s success. Special awards can make you a frontrunner in any pageant but the Q&A portion can make or break a candidate.

During the Q&A, finalists were given 30 seconds to answer each question from the judges Each judge will pick a candidate and asked what their question is.

Here’s the winners’ full text of the Q&A portion.

Barreiro: “If you win the crown tonight, what will you do to get more women in the workplace?”

Ganados: “If I win the crown tonight, what I do is to promote my advocacy. My advocacy is for us women to fight for our rights and for the elderly women and for us to know that someone is loving us, someone is pushing us to whatever ambitions that we have. We will be able to rise from our decisions, to whatever dreams that we have, the goals that we have, and we will achieve it because of those values, that wisdom that they gave us. Thank you.”

Borja: “If you could have the opportunity to meet somebody globally influential, who would that be and why and why?”

Bea Patricia Magtanong: “I really idolize Angelina Jolie because she was blessed with not just a thriving career in Hollywood. But then as a woman, she was able to use that influence, that voice, and that audience, to advocate for the causes that she believed in, like breaking hunger with the UN. And someday, if given a chance, I would like to be just like her. Thank you.”

Cu: “Migration and migrating are the most searched words on Google. What would you like to say to those disheartened Filipinos who seemed to have lost for hope?”

Saeed: “I would say that history had shown us that Filipinos are very good at remaining steadfast despite any hardships or any violence shown towards us. We do not stand for discrimination and I would say that if you lost your way, turn back to God and walk towards Him. Thank you!”

Standhardinger: “What is your best non-physical asset and why do you say so?”

Lo: “I believe that the best non-physical asset could be your spirit. I believed that when you have a strong spirit, a strong aura, we shine from within, we spread it. It’s a beautiful butterfly effect and I continue to encourage everyone to have positivity and show love. There’s no need for negativity. There’s nothing productive about it. Let’s continue to shine and show love to the people. Thank you.”

Miss Universe 1969 Gloria Diaz: “How do you define success?”

Bautista: “My definition of success is raising my flag of bravery against the world. It’s because I experienced hurtful words; I heard so many things that hurt my feelings. But then, that 10-year old girl stood up and fight for her rights, fight for what she believes in and she believes in herself and trusts herself. Thank you.”

Nadine Lustre: “What advice can you give to a 16-year-old girl for her to become more socially aware and become an empowered young lady?”

Abesamis: “My advice to a 16-year-old girl is that for her to read more and also understand life because in the future if you do not read more or understand life, you wouldn’t know what’s really happening and that would be a hard thing for you and that’s it. Thank you.”

Nadine Lustre: “How do you react to rape jokes?”

Bernardo: “It’s so sad that a lot of people are making jokes about rape. It is not normal for us Filipinos. We should all stand up as women to use our voice for sexual harassment. And I think it is nice that our government is doing safe spaces bill that he passes, so that women around the world, especially here in the Philippines, can have a safe and environment for all of us in school, in the colony, everywhere. Thank you.”

Are you happy with our current Bb. Pilipinas 2019 queens and their winning answers? Share your reactions by posting a comment below: 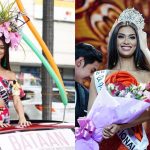 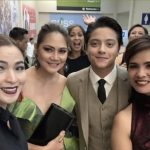