Filipino contestant Jej Vinson wowed four judges Kelly Clarkson, John Legend, Blake Shelton, and Adam Levine at The Voice Blind Auditions. Singing Drake’s “Passionfruit”, Jej had all the four judges turning. Needless to say, his performance resulted in a moment of awesomeness, not only from the judges but also from the audience as well.

Kelly Clarkson who even went up to him as he finished his performance said that it will be such an honor if he chooses to be on her team. John Legend, on the other hand, praised the way he gave a new life to the song he performed. Blake Shelton, out of all the judges gave the most dramatic speech convincing him to join his camp saying he might very well be the next winner while Adam Levine that his voice is perfect. After much thought, he chose Kelly Clarkson.

Jej Vinson hails from Davao, Philippines and is now living in Los Angeles, California, United States. He was born in the Philippines and lived in a traditional setting until he was 15. His love for music started at a young age when he sang through a karaoke. His influences are his parents whom he saw ‘singing in the choir’.

At 15, he and his family went to the US to take their chances of a better life. They went to South Dakota then at 18 he went to an a cappella camp in Los Angeles. This is where he learned about his calling which is music. He stayed there for good and his family followed him. He goes to USC and takes up Music. He used to be the Music Director of his school’s a capella group.

At the blind auditions of The Voice, his family was seen supporting him. They were also jumping out of down when the four judges turned for him. It goes to show how Filipino families support each other. 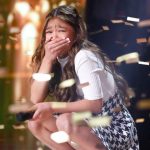