Not so long ago, the daughter of Jackie Lou Blanco and Ricky Davao has made an appearance on the well-renowned noontime show at ABS-CBN, “It’s Showtime.” And, yes, the pretty face has definitely trended on social media… as Ryan Bang’s girlfriend. But is she really the actor’s girlfriend?

She appeared specifically on the segment, “Magpasikat,” in which she became part of the performance of Ryan Bang and Karylle. And, yes, the said performance spread on social media like a wildfire. It’s highlight? The introduction of Ara Davao, Ryan Bang’s girlfriend.

He introduced her to the director of the show, Director Bobet Vidanes, who told Ara that she has a big resemblance to celebrity couples Ricky Davao and Jackie Lou Blanco.

People were then shocked to know that the girl with a pretty face is really the daughter of the two veteran actors.

Ryan Bang then revealed that Ara, or Arabella Davao, is her girlfriend… on the said performance only. He said they are only friends, and it was only part of the performance which has a futuristic theme.

For those who do not know yet, Ara is a student at the Ateneo de Manila University taking up International Studies. She is also the third and the youngest daughter of Jackie Lou and Ricky.

Based on the article from Preview, she loves Tagalog romcoms, which include “One More Chance.” This is the reason why a lot of her friends usually call her “baduy.”

On top of that, she also loves OPM.

In an interview, she said that entering showbusiness is not her priority at the moment since she does not want to do it at the same time as her studies.

“It’s not what I want now. I don’t want to do it at the same time as my studies ‘cause I’m still enjoying being in college, spending time with my friends,” said Ara. 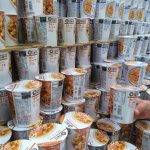