Not so long ago, Frankie Pangilinan’s Instagram photos showing off skin in a red bikini have gone viral on social media — and they look “hot.” As such, her mom — the Megastar Sharon Cuneta — took to Instagram to put in a comment on one of her daughter’s viral photos.

“Don’t show too much my Baba! Hahaha! But lookin’ good my baby! Miss you. I love you so much!” she said.

Sharon was one of the first netizens to comment on the shared photos of Frankie, 18, at the beach. 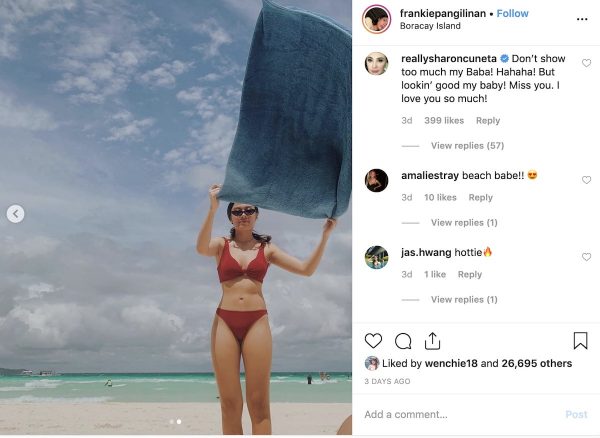 It seems that the photos were taken during Frankie’s vacation in the beautiful island of Boracay as part of her celebration. She recently graduated from Senior High School.

Frankie is going to study college abroad just like KC Concepcion, Sharon’s daughter with well-renowned actor Gabby Concepcion, her former husband. Specifically, Frankie will attend college at New York University, according to Sharon Cuneta. What this means is that her “baby” is going to live independently just like her older sibling KC.

Cuneta has been posting a slew of updates on social media about her relationships with her children.

Hot on the heels of Sharon’s comment to Frankie’s bikini photos, former senator Kiko Pangilinan has also reminded her daughter to “be careful” on what she posts online.

On June 14, Pangilinan along with her daughter Frankie made an appearance on a morning show in ABS-CBN, “Magandang Buhay.” 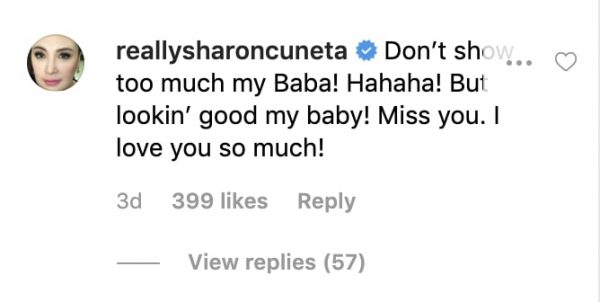 “Just be careful of what you post. Kasi sabi nga nila, once it’s up there, it will always be there,” he told Frankie.

Frankie, in the meantime, responded that she is thankful that her parents always ensure that she and her siblings “are in a healthy place when it comes to social media” and other things.

“Yes, they taught us naman also to be responsible,” she added.

“Congratulations to my darling Frankie! Proud of you, proud that you hurdled the challenges, faced acid tests and got things done. We did it! Now off to College,” he said.

Frankie, for those who do not know yet, is the eldest daughter of Sharon Cuneta with Kiko Pangilinan. 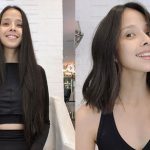 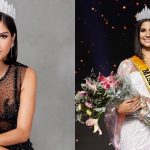