Julia Horta will represent Brazil in this year’s Miss Universe competition to be held in South Korea in December. The 24-year-old beauty was crowned Miss Universe Brazil 2019 on March 9 in Sao Paulo, Brazil.

While she did a great job beating the other local contestants to win Miss Universe Brazil, she faces perhaps a more daunting task in the Miss Universe competition where she will be competing against the likes of Gazini Ganados from the Philippines and Cindy Maria from Albania, among many other international challenges.

Nevertheless, she is still considered to be among the early favorites to win the crown in South Korea in December 2019.

Here are facts you need to know about Julia Horta ahead of this year’s Miss Universe competition.

Miss Horta shot to fame in 2015 as Miss Minas Gerais, later in 2017, she added to her collection of crowns by winning Miss Tourism Brazil.

Julia Horta studied journalism at the Federal University of Juiz de Fora, and she is a journalist by profession having worked at several TV and radio stations in Brazil.

She is a Pageant Veteran

This is not the first or second time that Julia Horta has competed in a pageant. She started in 2014 and in 2015 she participated in Miss World Brazil where she came 4th.

In 2017, she was second runner-up in Miss Brazil World. She also represented Brasil at Miss Tourism International 2017 and bagged the 4th runner-up position.

She is an Influencer

Julia Horta has made huge differences back in home in Brazil as an influencer and public speaker. She even has several workshops across Brazil. 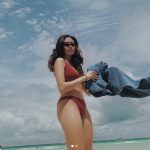