“What would u do if u…find your missing archive dress suddenly being worn by a beauty queen and u’r not even aware of it…and not even credited. I think she looks good of it…but…could do with a little help.. been looking for it since 2015 (how it landed there?).how can I get it back? should I buy it back? can I even buy it back?” Lesley wrote on his Facebook account.

In another post, Lesley posted a screenshot of an online shopping selling her dress as he asked her Facebook friends what’s the website of the store.

“Omg someone just sent this to me..someone out there is letting or selling this gown? But with a retail price? How come? Hindi naman for sale ang damit? What website is this please! Can I buy it privately?” Lesley said.

The Miss Universe Philippines 2019 posted the photo of her wearing the dress last July 29 in her Instagram account with the caption “Maayong Buntag!”

She credited BJ Pascual for the photo, Anthea Bueno for the makeup, Aries Manal for hair and Qurator Studio and Pam Quijones for the styling.

In a report by GMA News, Ganados said the incident was just a little misunderstanding between the designer and stylist Quijones.

“Actually, I had a stylist from Curator who is Pam Quinones. She is the one responsible for all the gowns and outfits I wore that day. I confirmed it with her and she said that the dress was borrowed. And then the designer forgot that he lent it to Pam to the point that the designer already flew out of the country,” Ganados said.

“It’s just clearly a miscommunication and the designer forgot simply forgot about it. We’re trying to communicate with him so that he can post another resonating reason to clear things out,” she added. 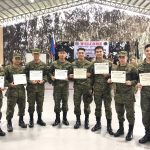